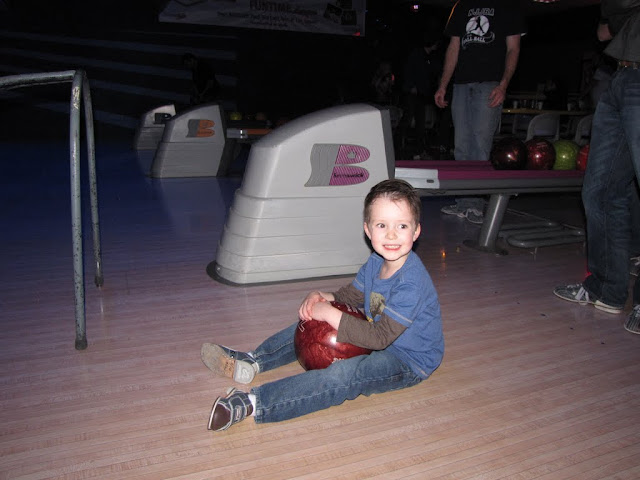 We’ve started trying to have a dedicated “family time” each week, but I didn’t know if Lincoln really “got” the idea. This past weekend we were talking about going bowling for family time, and Lincoln said, “Oh, like when we all played on the playset together and when we all cleaned up the basement and played in the basement together.” Well, those are the only times we have actually done family time. Guess he “gets” it. 🙂
So, he seemed to really enjoy the bowling. . . 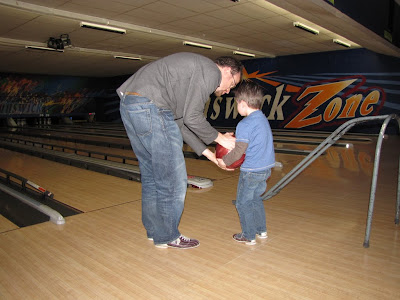 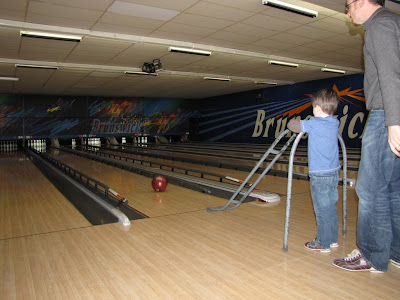 and with Mark directing his angles he outscored both Mark and me with a whopping 130. Ok, so he only beat Mark by 2. Me, on the other hand, well, he may have doubled my score.
Other Lincoln-isms from the week:
On our way to the bowling alley which we had told Lincoln was near the church building, Lincoln asked why it was there. Mark replied, “Why is blue blue?” Lincoln thought for a moment, then said, “Because that’s the way God made it!” Then he said, “Hey Daddy, why is green green?”
We were driving home in the early evening, and the moon was visible. Lincoln found it out Cora’s window, and as we turned, he said, “Let’s see if it follows us!” and when he saw it out the back window, he exclaimed, “It did!”
Lincoln currently loves to spin around in circles until he is quite dizzy. He often then says, “Mommy, come over here so I can make you dizzy too!” and “The room is dizzy!” and other such statements. 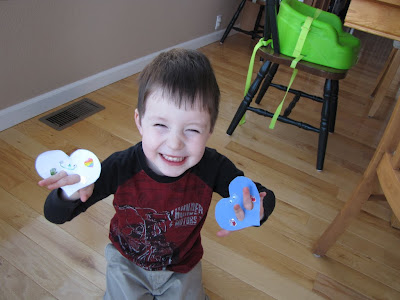 We are loving having a 3 (and a half, as he is quick to remind us) year old in the house.

This entry was posted by Nicole on February 14, 2011 at 6:56 pm, and is filed under Family. Follow any responses to this post through RSS 2.0. You can skip to the end and leave a response. Pinging is currently not allowed.